As the Death March got bigger, various people called for this interesting bunch to get together more than once a year. These seasonal marches are the result of this desire. In Summer of 2012, they were added as an official part of the Death March calendar to be held every season.

Then Premiere Bob Normal co-opted Jeshii‘s COLT ride event and claimed the walkers as attendees. Sneaky, but not specifically forbidden. Through the photos, only 30 people were confirmed to have walked it (most rode bikes), so Bob Normal only got 6 points (which he refuses to log in to the site to distribute, so really a non-event).

The Downward Spiral
Saturday, December 12, 2015
Officer in Charge: Acer
Total Attendees: 17 starters, 7 finishers
A 20 kilometer hike spiraling into the depths of DTLA. The first Autumnal March to have any photographic evidence of ever happening. 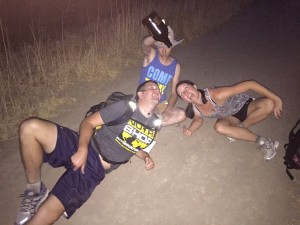 64oz. to Freedom
Saturday, June 14 @ 4:00pm
Officer in Charge: Mike
Total Attendees: 2 (Mike, Bailey
The route was from Wolf Creek Brewery to the White Harte. No points were earned this day. 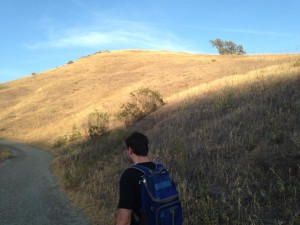 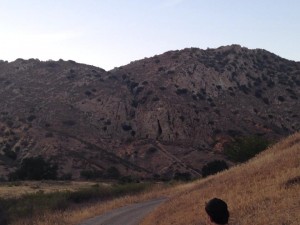 Death March Winter Seasonal Extreme Urban Drinking Hike: The Brewtour
Saturday, March 1, 2014 @ 11:15am
Fullerton Metrolink Station (North Side)
Officer in Charge: Acer
5 complete finishers (including Acer, Mike, Tron, Javier and observer Amanda), 4 more partial attendees
Inclement weather helped prevent any more than 5 of the heartiest Death Marchers to even attempt this extreme urban hike. While there is talk of it not being a “real” march, the bylaws allow for marches of all varieties. Lt. Marshal Acer was awarded 1 point for leading 5 members to complete the tour. Tron and Javier were also restored to ranking as all seasonal marches also qualify as absentee marches as well.

The very first Officer planned Seasonal March was be Premiere Supriya’s hike. While not much is know about the hike, we received a report that 3 people were in attendance. 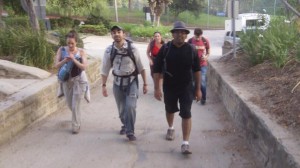 Avoiding the fate of the Winter March, Spring 2012 saw Climb the Griffith happen on the first try. 6 Death Marchers went from Eagle Rock Brewery over Griffith Park and down into Universal City on June 2, 2012. 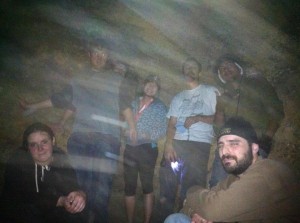 This was postponed once. As is usual for the Winter March.

A number of hikers met up at the Fuller Compound to take the bus to Ladyface. When the bus never showed up, Jeshii drive all present in Kaori to Ladyface and they noshed on Freebirds.

After Freebirds, growler fill commenced and the troupe began walking to Ladyface. They saw a weird statue and ended up in the wilderness. They made some poop jokes. Earl chased a pack of coyotes singlehandedly. The cave was dirty as usual. Jeshii was too drunk to remember much else. They probably finished relatively early. 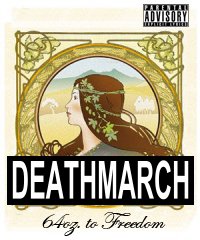 64oz. to Freedom is a night hike organized as part of Grand Marshal J.W. Fuller’s “Death March Year Round” initiative. Originally planned as an Absentee March in October under the title “The Cavalcade of Melancholia,” bad weather postponed it until March of 2011.

The hike was held on March 4th and had a fairly large gathering. Most of the Marchers bought 64oz. growlers at Ladyface and walked to the Grand Marshal’s former house. Due to the amount of alcohol consumed, it is only sketchily recorded, and even less remembered.

Many had so much fun, this hike was repeated…

The March of Antithesis is an event that likely occurred in 2002 or 2003. It was considered the symbolic opposite of the Death March. The name was given to it by Acer.

The March occurred late one night when Mike, Jeshii, Acer and Suki were all bored. They decided to walk along the beach. Heading north from Isla Vista, they walked all night to Shangri-la (a nickname for Bacara Resort).

On the walk back, they stopped at 7-11. It ended approximately at sunrise. Acer vaguely remembers having a midterm or a final or something about two hours later, which he looks back upon with a distinctly nauseous feeling.

Sand Faeries were seen on the March. Everyone on the March stole something from Shangri-la; Jeshii and Mike stole jars of strawberry jam from a kitchen facility, and Acer took a broken piece of pavement from the parking lot. It is not known whether Suki also swiped anything or not.

In 2001, Max and Acer followed the exact same path as the March at roughly the same time of night. This event wasn’t really called anything and was just one of those crazy things they did late at night, but can be accurately called the zeroth March.

With the success of the 8th annual Death March, many have called for a revival of the March of Antithesis. It was slated for late 2006-early 2007. Sadly, a route was never chosen, but the Backbone Trail from Temescal Canyon to Point Mugu or the Simi to the Sea trail might be good candidates if the motivation for this event ever materializes.