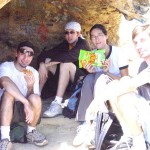 This Death March was one of the smaller ones due to time conflicts, and really only had three members from previous marches. Without noble , this March was the first to start at the top of Reseda instead of his Pescadero House. Also, without , clenched the “most hikes” ranking which lead to his coronation as Grand Marshal the next year.

On this hike, everyone got lost on the Musch Trail and ending up on a strange road.

After the March, they went to Mongolian BBQ, where they were joined by many more people, bringing into question the motives of some involved.