The Absentee March is a substitute for the Death March to the Sea that was created by Acer due to his involuntary absence from the Los Angeles area on the date of the 2003 Death March. In order to make up for his absence and save face in the eyes of the Marshals of the Death March, he went on this 13 mile hike through the mountains west of Tokyo with friend and fellow manly adventurer, Brandon M.. Together they crested the peaks of five mountains over the course of about eight hours. It is partly due to his creation of the Absentee March that he was accepted by the Grand Marshal as an officer of the Death March, and we all hope that others will participate in Absentee Marches of their own if they involuntarily miss out on any given Death March.

It should also be noted that Absentee Marches can be held at any time after a missed Death March (before the next Death March, of course). Also, there can be many Absentee Marches during the year. Seasonal Marches are special because they count as Absentee Marches, no matter the length. So if you do an epic hike and missed the previous Death March, petition the Grand Marshal (or leave a comment below) to get it counted!

There’s a similar, yet distinct, type of hike called a Make-up March. This was invented by Brandon in an effort to make up for lost years of hiking. This earns the Marcher 1 point for that missed year. The difference is mainly that it is performed years after the march to be made up for. Absentee Marches are performed the same year for missing the main march. 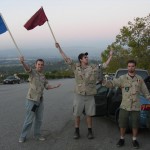 Mike, Jeshii, and Acer went on an absentee march on September 20th, 2008 to make up for Acer‘s missing of the 2008 Death March. Acer gained titles and 2 rank points, while Mike and Jeshii were there for moral support. This was also when the Altar of Freedom was discovered. This was added as a Spiritual Stop on the 2009 Death March.

With Mike unable to attend the 2010 Death March, he performed an Absentee March shortly after to retain his position as an Officer. Due to the way that rank points are calculated, this moved him from Grand Marshal to Vice Lt. Marshal. This was the only Death March in history that Mike missed.