So, a crazy new achievement which seriously breaks all I ever thought about achievements was radified at the summit this year. It is called “The Fantastic Four.” It is based around the number four. Check out the bylaw:

The Fantastic Four – A team will earn four rank points to distribute as they please among four (4) different successful Death March participants for that year for completing all of the following four (4) conditions. There must be four (4) witnesses outside the team who can corroborate this story. This bylaw expires after four (4) years if no team has successfully completed it.
1. The team must be four (4) or more people
2. Four (4) of the team members must finish the march together, as in no one may register a finishing time between these four (4) members
3. All team members must complete the same four (4) punishments
4. Four (4) members of the team must complete four (4) unique achievements that are new to that member

Now let that sink in.

A team that completes it get 4 points to distribute in addition to an ultra-rare achievement!!! That’s like a whole year of marching! But with great power comes great responsibility. Yes, the conditions are harsh.

Basically, a team of 4 (or more) has to finish the march in such a way that NO ONE ELSE registeres a time between them. That’s 4 people who seriously have to march together to the end (or at least meet up before touching the ocean). They also have to finish the same 4 punishments. That’s like, drink alcohol, eat a chili burger, bring a flag, AND do… well basically anything (personal punishments count, but they’d all have to do the SAME personal punishment). And they would have to do 4 unique achievements. Personally, I don’t think that is as hard as the punishment requirement, BUT some people have done most of the punishments. And don’t think the Grand Marshal is going to let you say, “We did the Fantastic Four!” NOPE, won’t fly.

The bylaws have been updated! After the Summit on 7-24-2014, here is a summary of the changes: 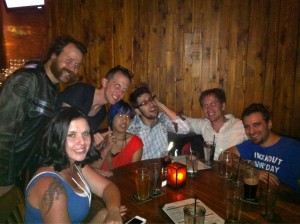 The Death March Summit 2012 was a rousing success. A number of bylaw changes were enacted. Below are the general changes.

You can read the bylaws in their new updated form here! The minutes recorded at the meeting (warts and all) are listed below.

Seasonal Marches
– as written, jesse yea all others nay
– unanimously RADIFIED WOTHOUT LENTH/difficulty
– mike makes a motion to approve similar length
– Gregg asked length time or distance.
– mike yea, others nay
– should we have rock paper scissors as a tie breaker vote
– would cancel chancellors
– tyrant of the minority
– move the rank section order around
– unanimously radified
– ace: if the ruling death marshall
“if by midnight Aufust 21th, the grand Marshall has not solidified a date for the death march, the next ranking member of the march has 24 hours to schedule and inform yhe public of the date as acting Grand Marshall. If this member does not plan and inform within 24 hour, they lose this opportunity. This process continues every 24 hours until the autumnal equinox (previous working)
– radified unanimously
– added comment c. (for merely attending a march).
– radified unanimously
– driver wordin over team captain
– radioed unanimously
– team mottos added
– radified unanimously
– driver points!!!
– Partial points based on how many people are shuttled?
– no consensus, no changes
– seasonal march
– ” Which officer is in charge of which season shall be determined by the Grand Marshal at the end of the Banquet.”

Hey, are you interested in helping change the face of the Death March? Do you have ideas to make the Death March better, bigger, stronger??? Well, come hang out with the Officers over beers at STOUT on July 10th, 2012 starting at 8pm. We will be discussing and RADIFYING new changes to the Bylaws.

“Whoa, whoa, whoa, hold on here,” you may be saying to yourself, “Achievements? How are those different from Punishments?”

Glad you asked! Achievements are a new thing to shoot for starting with this year’s Death March. Think of them as Death March merit badges. They are recognition for doing something once.

This should clue you in to how they are different from Punishments. The Punishments are there to be a part of every Death March. If it is something that we want people doing EVERY SINGLE YEAR to make the Death March more grueling, it is a Punishment. The Achievements are larger (or sometimes smaller) tasks that we really couldn’t ask people to do every year.

Another difference is the reward. Punishments give you a title that is added to your name. Achievements are just there to say, “Yeah, I did that.”

Last, punishments are crowd sourced. By performing punishments personally, they can become the new official punishments. Achievements require typical bylaw radification (sic). Punishments can be done by accident and then done forever more. Achievements must be done with an already approved achievement in mind.

Here is a list of current Punishments as of 2011:
Alcohol Consumption – Drink some alcohol at any point on the hike. Earn protectorship of a country.
Tommy’s Chili – Eat some food with Tommy’s chili. Earn an honorific title.
Labours – Exercise! This one is actually pretty complex. You get stars and some cool titles added to your name. Please see the Bylaws or speak with Vice Lt. Marshal for more info.
Flagbearing – Carry a flag. Earn the flagbearer title.
Vegetarianism – Refrain from eating meat and eat vegetarian chili in protest. Earn protectorship of an animal.
Noisemaking – Carry a noise maker of some sort. Earn the troubadour or bard title.
Marching in Drag – Wear clothes and facial hair of the opposite sex. Earn a title with the word drag in it (drag racer, drag queen, dragnet, etc.).

Here is a list of the current Achievements as of 2011:
Gracious Bounty – Share food or drinks with at least 6 people.
Great Bounty – Share food or drinks with at least 15 people.
Ridiculous Bounty – Share food or drinks with everyone on the March.
Rock Star – Perform a musical piece of at least 1 minutes at Opening Ceremonies or Eagle Rock.
Greenfriend – Pick up every single piece of trash you see over the course of the Death March. Leave no trash of your own behind.
Alcoholics Unanimous – Drink five servings of alcohol during the course of the March.
Photogenic – Have your picture taken standing on top of the highest point of Eagle Rock.
Patriot – Have your picture taken at the Altar of Freedom.
McGuyver – Fashion some sort of device to assist a fellow Marcher in their time of need.
Early to Rise – Walk from the Sea to the top of Reseda before the Opening Ceremonies on the day of the March.
Absolute Twit – Tweet your location at least 10 times during the March.
Head in the Clouds – Visit the Parker Mesa Overlook.
Speedster – Complete the Death March in under 7 hours.
SpeedSTAR – Complete the Death March in under 6 hours.
Speed Demon – Complete the Death March in under 5 hours.
Champion of the Sea – Finish the Death March first.
Waterlogged – Completely submerge yourself in the ocean upon completion of the Death March.
Voice of the People – Propose a bylaw that is radified by the end of the March. May not be earned by Officers.
Paparazzi – Take a 50 pictures of the Officers on the March.
Are you guys a club or something? – Dress to the theme of the March.

There is the website that shows off your achievements, but feel free to make badges, dog tags, or patches to show the world what you have achieved.

Until Death We March,
Sir J.W.Fuller, Grand Marshal of the Death March and Protector of Japan, Flagbearer, Troubadour, o.g.