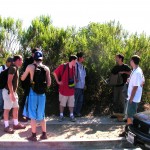 The 8th Annual Death March to the Motherfucking Sea was the first well documented Death March. With 11 participants, this was the largest Death March since the 2003 march. Also, brought in a large number of friends, further showing his dedication to the cause. This was the march where punishments became related to titles.

It started with , , and (meaning the original Ride Corps was only 4 people!) driving down to the end, and then everyone taking Phoebe back to Reseda. After a stop at Tommy’s on Topanga, they met up with the rest of the participants at the gate at the end of Reseda, sans . After waiting for , the march officially began at exactly 9:50am PDT. They later found at the actual trailhead.

At 10:25am, they began along the Bent Arrow Trail. 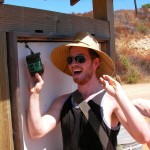 At 11:25am, they arrived at the Hub where found a geocache. On the way up, the slower group encounters this random girl on her way down who jogs right up to and remarks “Hey Ace, you’re slowing down!” After a moment of surprise, it became clear she was simply a messenger for someone in the faster group who wanted to boast their speedier arrival to the Hub.

At 12:00am, they arrived at Eagle Rock. Much Punishments were imbibed. lost his title as Protector of Buenos Aires (Argentina?) when he refused a beer.

The fast group took it upon themselves to do pushups every time they stopped. After this rule was enacted, they only stopped once by accident. After they did their pushups, they didn’t stop again until the sea. This noble act of self-Punishment was the original inspiration for the Redeemer title.

Around 3:30pm, the ocean was visible for the quick members. They made a brief stop and decided to do push ups to punish themselves. After this, the quick group didn’t stop until the end. At about the same time, the second group had finally crossed the stretch just past Trippet Ranch. 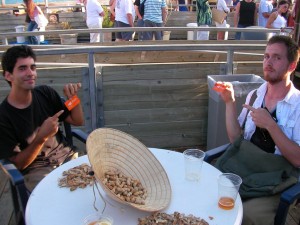 At 4:52pm, touched the ocean to complete the Death March, followed by , , and . The 4 then ate peanuts out of the ceremonial hat and had a couple beers. They then got sick of waiting and got back to the cars to find Mike, Ace and Baker at about 6:30pm.

Meanwhile, the second group had split into even smaller groups with , , and deserting and who required more frequent stops due to leg pains. Leaving behind landmarks for and , the quicker of the slower group came across the hairpin turn where the path makes a sharp split into the Los Liones path and SomeWhere Else. This is where they decided to stop and regroup as only could be depended on to not miss this break.

, , , , and officially finished off the march with Mongolian BBQ at around 8:30pm.